Math & Physics Problems Wikia
Register
Don't have an account?
Sign In
Advertisement
in: Calculus, Geometry, History of Math,
and 2 more

View source
watch 01:36
We're Getting Mutants in the MCU - The Loop
Do you like this video?
Play Sound

through which a centrally placed cylinder of radius

has been cored out (drilled out and the material removed). The remaining shape is called a napkin ring. Determine the volume of the napkin ring.

Consider the diagram of the cross-section of the napkin ring (Figure 2). Let the radius of the sphere be

. Let the radius of the cylindrical hole be

, and half the height of the cylindrical hole be

The volume of the napkin ring

The volume of the sphere and the cylinder are well known:

Use integration to compute the volume of a spherical cap: 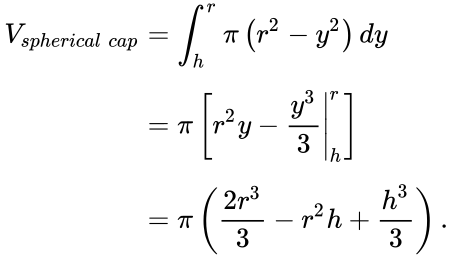 Hence, the volume of the napkin ring is 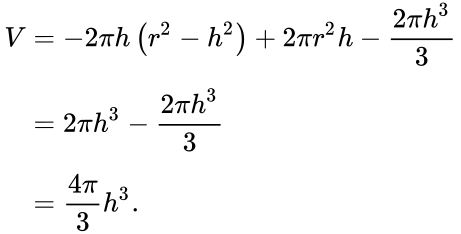 The shell method is much faster for this problem. By revolving the function

around the y-axis, and applying the shell method formula, we get the upper half of the napkin ring. Doubling this gives the total volume: 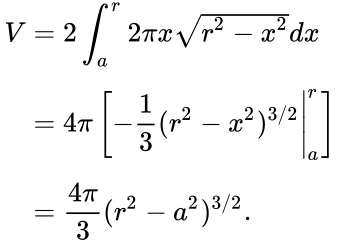 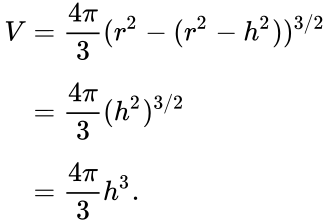 Who would have guessed that this volume is independent of the radius of the sphere! This means that if you core out any sphere of any size so that the remaining napkin rings have the same height, those napkin rings will also have the same volume! This looks unbelievable at first, but is in fact true!

The napkin ring problem dates back to Edo Japan. Seki Kowa (1642 - 1708 AD), the leading Japanese mathematician at the time, was the first person to have solved this problem using a form of integral calculus called Enri. Seki Kowa called the shape kokan (弧環, lit. "arc ring").

Community content is available under CC-BY-SA unless otherwise noted.
Advertisement